Fish chowder is one of my all time favourite meals and I have passed this love on to The Devil Child. Tonight he has especially requested it for dinner and this is the recipe I use. I say 'recipe' but this is a very loose description of what I actually do and what I actually use ... of course it must have fish and potatoes and milk and cream but other ingredients are optional and interchangeable with many other things ...


The Ingredients Today Were:


Today I started with some lardons and fried them in a little oil with some chopped onion until gently browned.

In a separate pan I cooked two large carrots and two large potatoes (roughly chopped) with just a little water until soft and squigee. I then added salt and pepper and roughly squashed them. I then added the can of drained sweetcorn.

I then combined the two pans ingredients and added the defrosted peas. This mixture should now be very thick and gloopy. At this point I checked the seasoning again and added plenty of fresh salt and pepper.


THIS RECIPE CAN BE PREPARED UP UNTIL THIS POINT AND THE LATER STAGES DONE NEARER THE MEAL TIME. THIS MAKES FOR A VERY EASY SUPPER DISH.


The next stage is to add the milk to the pan.

The mixture should be thick not like a stew but like a very heavy soup. Put on a gentle heat and stir frequently until all heated through.


Separately I have now skinned and boned the fish and cut it into even chunks. The frozen prawns must be defrosted thoroughly.


When the chowder has been heated thoroughly add the fish a little at a time (leave the fresh and frozen prawns until last) in order of their need for cooking - no small fish pieces will need more than four or five minutes and the prawns only three at most.

Now for the cream - the amount depends on thickness of chowder at this time (and thickness of your waistline!) Heat through gently now and do not boil the mixture once the cream is added.

If the chowder is too thick then add more cream - if too thin I add some potato flakes. I often put a little dash of Worcestershire Sauce in the pan at this time too as it gives a good flavouring but do not overdo this or it will discolour the chowder. 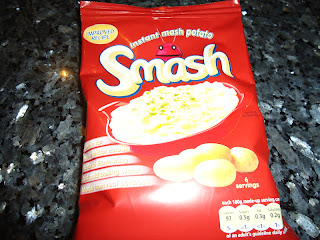 Sprinkle with chopped parsley and serve with sliced lemon and lots of bread for dipping.


A really lovely one pot meal for four cooked in around forty minutes. Serve it with a good bottle of Chablis and enjoy it. 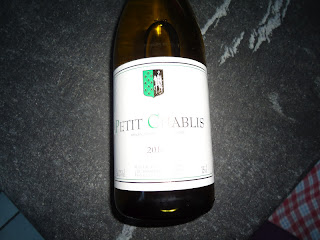 As I said at the beginning this 'recipe' can be altered to suit your taste. It does not need the lardons and the vegetables can be altered to your liking - add leeks or mushrooms - and the fish can be of any kind. For vegetarians the fish and bacon can be left out entirely and butter beans and other pulse can be added instead.  The only important ingredients are the potatoes and the milk, which form the base of the chowder. Whatever your taste this is a very easy one pot meal. Me? ... I like it just the way it is!

This is another of the  Devil Child's favourite dishes so I made this for our pudding. The ingredients are simple ...


Chopped bananas to cover the caramel ...

Whipped mascapone and double cream all over in peaks and dust with cocoa powder ...


And that is all there is to it. As you can see I seldom measure anything and just use what is available!

Being a mother of a large family means that it is difficult to cook on a small scale. Years of cooking for a tribe leaves a distinct mark.  I usually make too much of absolutely everything, which generally is not a problem as the family and grandkids usually take care of it all!

PLEASE REMEMBER TO ENTER MY GIVEAWAY ON THE FRIDAY BLOG POST
Posted by Annabelle at 06:39