The Sweet Potato Of  NZ


I first discovered kumara, the sweet potato, many years ago on my first trip to this beautiful island. It is widely grown in the area and can be found as often as the ordinary potato in homes and restaurants throughout the region. The word kumara is the Moari for sweet potato and hence its name in these islands. It was originally the staple food of the Maori until they had European contact when other foodstuffs became more readily available. Later it became more popular worldwide and is now commonly found throughout Europe. I love the taste of it cooked in any way suitable to the ordinary potato and find its slightly nutty flavour very attractive.


Sweet Kumara Pie
﻿
Recipe for this lovely sweet kumara pie, which is very similar to the American pumpkin pie.

Mix all ingredients together and put in pie shell (I use shortcrust pastry but could be any pastry or sponge - homemade or shop bought).
Bake at 180 degree for 30 minutes.
Decorate with nuts and serve with a dollop of cream. 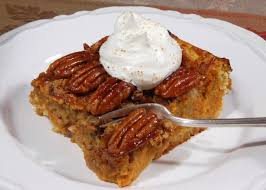 I told you it was very popular here!