I Am In Love - With Music 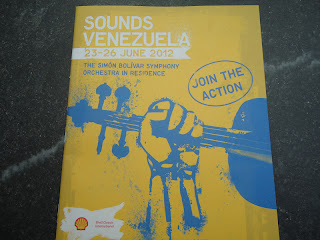 Now I know that I am too old to have a crush but sadly no one told my brain this -  so a crush I have on the charismatic Music Director of The Simon Bolivar Orchestra - the wonderful, vivacious Gustavo Dudamel.

I first came upon this genius three or four years ago when, quite by chance, I attended a concert of his in London and was captivated by him and his amazing Venizuelan orchestra. Since that time he has progressed musically to dizzy heights and is now also concurrently the Conductor of the Los Angeles Philhamonic Orchestra and The Gothenburg Symphony Orchestra too.

Still only thirty one he has taken the musical world by storm - a product of the astonishingly good "El Sistema" system of musical introduction. From an early age he studied the violin and musical composition and then onwards and upwards to every available musical award imaginable.

Today's concert at The Royal Festival Hall was a tour de force - vibrant, innovative, unusual - and all performed with the exhuberance and attention to detail that is the trademark of this maestro! I loved it!  (My friends loved it too, and one in particular has decided to adopt Gustavo as her new guilty pleasure and is at the moment busy knitting him a scarf - hope he likes lilac!)

Classical music lovers will probably know that Gustavo Dudamel is the recently appointed Music Director of the Los Angeles Philharmonic,  The Gothenburg Symphony Orchestra, and The Simon Bolivar Orchestra too.  But all those interested in education should take an interest in this remarkable young man.

Mr. Dudamel, who is thirty one years old, is certainly an excellent conductor. To see for yourself, watch this YouTube video of Dudamel conducting the Gothenburg (Sweden) Sympthony, where he is also music director, in the first movement of Beethoven’s Fifth Symphony, in 2009. Then, for good measure, you might want to view this 60 Minutes report, with more clips of Dudamel’s conducting and footage from an interview with him.

But Dudamel is also much more than merely a conductor, however fine. He has become an ambassador for a unique system of music education that has been developed in his native Venezuela, known as “El Sistema” (The System).

El Sistema is basically a network of music schools that provide free musical instruments and intensive music classes, beginning from kindergarten age through high school, to children from the poorest families in Venezuela.


"Music has to be recognized as an … agent of social development in the highest sense, because it transmits the highest values — solidarity, harmony, mutual compassion. And it has the ability to unite an entire community and to express sublime feelings".

In other words, El Sistema is so successful because it gives at-risk children from impoverished communities a sense of togetherneess in which aspiration and achievement are highly prized. As a product of the program, Gustavo Dudamel has helped to raise consciousness of El Sistema throughout the world.

El Sistema’s results have been so impressive that efforts are being made to replicate this type of music school in all countries. Some twenty El Sistema-type schools now exist all around the U.S and the world. The latest, in Scotland, UK is already being hailed as successful.


One that has received special recognition is the Conservatory Lab Charter School, near Boston (go here). Another is the Atlanta Music Project, run by Dantes Rameau (go here). To watch a CNN interview with Mr. Rameau about El Sistema, go here.

El Sistema has also been the subject of an inspiring documentary film, entitled Tocar y Luchar (To Play and To Fight), by Alberto Arvelo Mendoza, that showcases the project’s young people, their teachers, and their accomplishements together (go here).


With special thanks and credit for information to  thebestschools.org