NOVEMBER
There is wind where the rose was,
Cold rain where sweet grass was,
And clouds like sheep
Stream o'er the steep
Grey skies where the lark was.

Cold wind where your voice was,
Tears, tears where my heart was,
And ever with me,
Child, ever with me,
Silence where hope was.
Walter de la Mare
1878 - 1953

This poem was written to commemorate the death of a child. 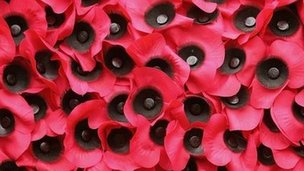 In the UK, The Royal British Legion holds a poppy appeal each November when poppy lapel buttons, made by ex-armed forces, are sold to raise money to support the armed forces and their families through difficult times. Poppies were chosen as a symbol because in the Fields of Flanders, during the First World War, the blood of the fallen appeared to onlookers like a field of blood red poppies. On Rememberance Day (November 11th) a service is held yearly at The Cenotaph in Whitehall,  London, to honour the dead from all wars. There is also a two minute silence on the 11th hour of the 11th day of the 11th month, which is participated in by the majority of the country to commemorate the war dead.